Statement: All states must ensure access to safe and legal abortion as a matter of human rights, say UN experts

As an essential reproductive healthcare service for women and girls, access to safe and legal abortion is critical to ensure their fundamental right to autonomy, equality and to physical and mental health, UN human rights experts* said.

On the occasion of International Safe Abortion Day, the experts issue the following statement:

“Denial of access to safe and legal abortion drives service provision underground into the hands of unqualified practitioners, and exacerbates the risks to the health and safety of the affected women, in the form of pregnancy-related injuries and death. It is estimated that 25 million unsafe abortions take place every year, causing the preventable deaths of about 22,000 women, almost all in developing countries. Additionally, an estimated seven million women and girls experience injuries resulting in impairment and infertility. In contrast, countries where women have the effective right to abortion on request, supported by affordable and effective family planning measures, have the lowest abortion rates.

“In too many States abortion is still criminalised, or not accessible in practice, even where it is legal. Some women face incarceration for the decision to terminate a pregnancy, even when their own health is at risk. Some are incarcerated in cases of miscarriage. According to international human rights standards, States have an obligation to refrain from the use of criminal law to punish women for ending a pregnancy, as well as to repeal restrictive laws and policies which put women and girls’ health, safety and lives at risk.

“States should guarantee access to legal, safe and affordable abortion and post-abortion care for all women and girls. Those living in poverty, in rural areas, with disabilities, as well as migrant and indigenous women and those belonging to ethnic minorities, continue to be the most affected by structural discrimination limiting their access to health care, including abortion services. Women and girls in situations of crisis, whether due to conflict, natural disasters or economic austerity measures, also face an increased risk of harm.

In this context, we welcome the adoption by the UN General Assembly of a landmark ‘Political Declaration on Universal Health Coverage’ on 23 September 2019, which restates the need to ensure universal access to sexual and reproductive healthcare services and reproductive rights.

In recent years, we have observed a positive trend in several parts of the world towards removing barriers to accessing legal and safe abortion, which we hope will be followed by other countries as well.

Constitutional bans were removed, criminal provisions were repealed by constitutional courts, laws were passed taking abortion out of criminal codes and regulating the service in health legislation and the right to safe abortion was reaffirmed by some national Courts as a constitutionally protected right. In others countries, women who had been detained and sentenced to long incarcerations after stillbirths or miscarriages were released.

However, there are also attempts, in various parts of the world, to restrict access to this essential health service for women. Politicised religious conservative movements are making a concerted effort to roll back the rights of women and girls by pushing for criminalization of the procedure, with harsh punishments for those seeking and providing abortions. In some countries, the introduction of legal restrictions on access to State funding for, and universal coverage of, sexual and reproductive services, affects women’s ability, in particular the poorest and most marginalised, to access abortion, with severe human rights consequences. These measures are regressive and perpetuate abortion stigma which is harmful to women and girls’ ability to make important decisions about their health.

Twenty-five years after the International Conference on Population and Development where governments committed to ending unsafe abortion worldwide, which was reconfirmed at the Fourth World Women’s Conference, we cannot go backwards. The devastating consequences on women’s and girls’ lives and health caused by unsafe abortions leave no space for retrogression. All States should acknowledge that abortion is part of health care and is a matter of human rights, integrally linked to women and girls’ dignity and rights to life, health, equality, and privacy.

In light of this year’s International Safe Abortion Day, 130 Members of Parliament from 24 countries signed a letter to President-elect Von der Leyen calling on her to secure the rights of 15 million women in the EU who still lack access to safe and legal abortion.

The EU is founded upon the shared values of human dignity, freedom, equality, and respect for human rights as stated in Article 2 of the Treaty on European Union. This notion, however, does not hold up when it comes to the sexual and reproductive health and rights of women across our Union. Recent years have witnessed an upsurge in efforts of governments and anti-choice movements to obstruct a woman’s right to choose. In some Member States, abortion can even lead to a woman’s imprisonment. 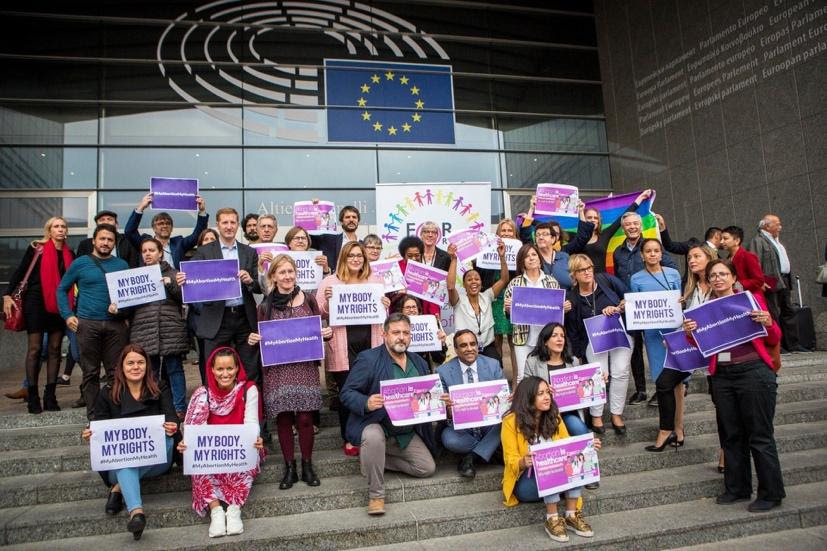 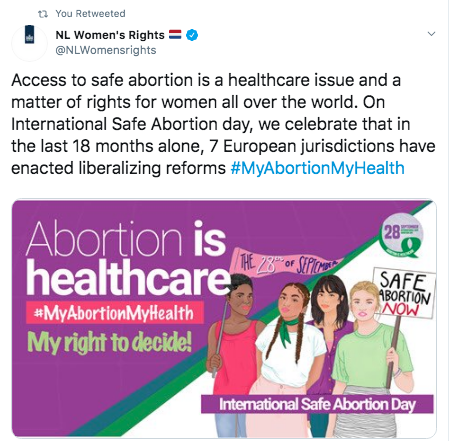 FIGO regards reproductive choice, including access to safe abortion services, as a basic and non-negotiable tool for ensuring the human rights of every woman, not just in one region or country, but globally.

When an abortion is provided by qualified providers in appropriate settings, it is one of the safest medical procedures known to science. But it is unacceptable that each year up to 13 percent of maternal deaths worldwide result from unsafe abortion.

It is right that the Political Declaration of the High-Level Meeting on Universal Health Coverage includes commitments to sexual and reproductive health and rights and gender equality. We urge leaders to uphold these rights and make concrete commitments for progress at the upcoming Nairobi Summit on the 25th Anniversary of the International Conference on Population and Development.

FIGO’s projects support 132 National Member Societies to be strong advocates for sexual health and rights in their contexts, and works to ensure promises made in global policy spaces translate into tangible differences in the lives of women and girls. FIGO will continue to support and champion the role of healthcare professionals in advocating for these rights at all levels.

Reproductive justice focuses on the right to maintain bodily autonomy, to parent and not to parent in safe and healthy environments. It does so by supporting community processes to foster the material conditions that shift underlying social determinants of health, therefore creating meaningful choices. It is critical of the impact of criminalization of sexual and reproductive decisions on the safety and health of communities. It weaves the individual into the community and the local into the global. This side event builds up on the conversation on intersectionality as politics and practice that we had during our previous side event. By engaging with the framework of reproductive justice, we continue to delve into intersectionality to show how it shapes our work in the context of the upcoming International Safe Abortion Day.

A joint statement on abortion and reproductive justice was circulated by the Sexual Rights Initiative in advance of the event and was signed by 300+ organisations and 500+ individuals.

OPINION: What the lack of access to safe abortion means for migrant women 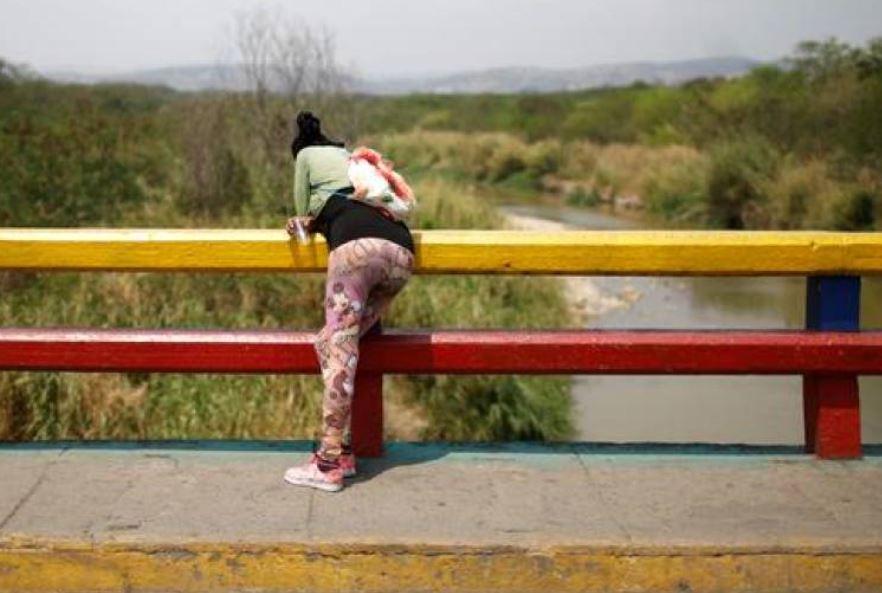 Cross-border bridge between Colombia and Venezuela, by Marco Bello/Reuters

Even in countries where abortion is legal, there are still barriers that disproportionately affect migrant women

“Like thousands of Venezuelan women, Patricia* migrated to Colombia, fleeing the humanitarian crisis in her country in search of a better life for herself and her three young children. Once in Colombia, her husband abandoned her and their children when she got pregnant again. Unemployed and without a partner, Patricia felt unable to raise another child. In a state of severe emotional distress, she sought to terminate her pregnancy. In Colombia, abortion is allowed if there is a risk to the health of the pregnant woman, including to her mental health. Despite having completed all the required psychological evaluations, the hospital refused to perform the abortion, telling her that, as an undocumented migrant, they would not perform the procedure in the public healthcare system.

“Unfortunately, Patricia’s story is not isolated, and this is not just something that happens in Colombia. There are an estimated 258 million international migrants worldwide, and even though world leaders included the right to universal health coverage in the Sustainable Development Goals in 2015, the reality is that migrants with irregular migratory status have limited access to services in public health systems around the world…

“Many countries have laws that grant rights to women, but at the same time they restrict migrants’ access to healthcare, especially if they do not have residence permits, creating societies that blatantly discriminate against migrant and refugee women and girls. For example, in Spain, women have fought for and obtained liberal abortion laws for all women, regardless of nationality. And yet, other laws and lengthy administrative wait periods operate in a manner that effectively denies this right to undocumented migrant women, treating them as second-class citizens.

“This discrimination impacts women in the most vulnerable situations, such as women who have been victims of human trafficking. Women who faced severe violence, including sexual violence, at the hands of traffickers are then subjected to treatment that impacts their physical and mental health, such as being forced to wait weeks for legal abortions or being treated in a degrading manner by those that have the responsibility to provide them with needed healthcare services….”